Fort Erie’s Wendy Gibson never dreamed a chance meeting in a retail store 10 years ago would end up bringing so much joy to cancer patients in Niagara.

Wendy was working at a store in Niagara-on-the-Lake when a woman who had lost her hair due to radiation treatments came in to purchase a hat.

“I felt badly that this woman had to take her wig off while she was shopping for a hat,” says Wendy, founder of the Hats of Hope program and member of the Fort Erie Kinettes. “Since I had been a Kinette for several years, I made it my mission to raise money and donate hats to the hospital. The women can get their hats long before their hair falls out.”

Gibson and members of the Hats of Hope program were recently presented with a plaque by Dr. Janice Giesbrecht, Medical Director of the NHS Oncology Program, for supporting cancer patients across the region for more than 10 years.

“The response has been wonderful, and the women are extremely grateful,” says Wendy.
Since the program was established, the Hats of Hope program has raised funds, purchased and distributed more than 7,000 designer hats to cancer patients throughout the Niagara region at no cost to the patients. The funds are raised through golf tournaments and other charitable events.

The designer hats are handcrafted by Tori Kosinec, owner of Mad Cap Hats, a woman who knows what women living with cancer go through because she and her mother are cancer survivors.

“Having been a patient myself, I’ve seen firsthand how a person’s mood changes when they see the Hats of Hope cart come down the hall,” says Tori. “Some of the other patients even get involved in helping the patient pick out the right hat for them. It’s been a pleasure to be involved with this program.” 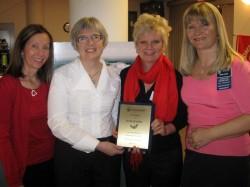 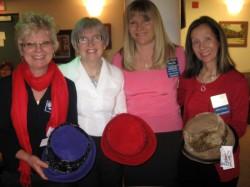