Today the Canadian Institute for Health Information (CIHI) will release its annual Hospital Standardized Mortality Data. We are pleased to announce that Niagara Health System continues steady improvement year-over-year in reducing the number of preventable deaths in hospital.

The following chart details the organization’s performance on this important measure since 2007. 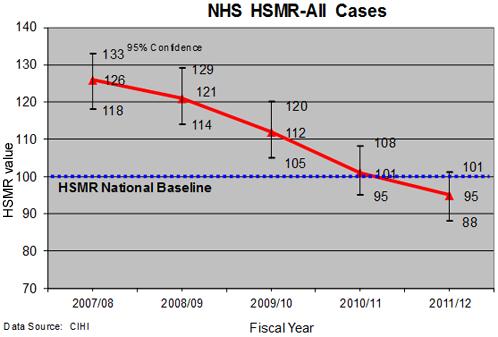 “Our organization-wide culture of quality, and continuous improvement in patient safety is clearly working,” said Interim President and CEO Dr. Sue Matthews. “Our staff, physicians, and volunteers are deeply committed to making our hospitals the safest in Canada, and we are taking large steps in the right direction.”

This year is also significant as CIHI has adjusted the HSMR Baseline. As CIHI explains, hospitals across Canada have increased their focus on patient safety, and as a result the previous baseline did not reflect the national average for hospital mortality. As of February 2012, HSMR results are calculated with an updated baseline using 2009–2010 data. Most hospitals were below 100 using the previous baseline (calculated from 2004–2005 data). With the updated baseline, about 50% of hospitals are below 100 and about 50% are above 100.

HSMR is calculated by dividing Observed deaths [actual acute inpatient deaths] by Expected deaths [expected number of deaths based on mortality in the base year], and multiplying that figure by 100.

This information has been publicly released by CIHI every year since 2007.