Medicine a family affair for the Roberts 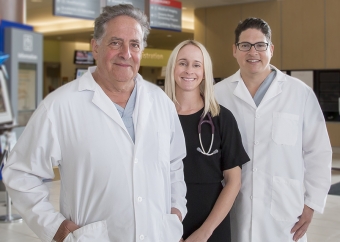 You’ll need to be more specific if you’re asking for a Dr. Robert at Niagara Health.

There are three of them providing care: Paul, an orthopedic surgeon with 35 years’ experience; his son Chris, also an orthopedic surgeon at the St. Catharines Site; and his daughter Jennifer, a hospitalist (a dedicated in-patient physician) at the Greater Niagara General Site in Niagara Falls.

When they were growing up in St. Catharines, Chris and Jennifer didn't initially aspire to follow in their father’s footsteps and become physicians. Instead, they both had visions of teaching.

“He (Paul) didn’t push any of us into medicine,” recalls Chris, who has been part of Niagara Health's surgical team for five years. “The only thing he pushed us to do was to stay in school and to try and achieve a post-secondary education.”

Paul says he’s proud that Chris and Jennifer pursued a career in medicine. “I feel very privileged that I have the ability to work with them.”

And he’s equally proud of his other children who chose different career paths – the oldest, Gord, is a winemaker, and the youngest, Mike, is an accountant.

Chris, 39, and Jennifer, 33, earned their medical degrees from Jagiellonian University in Krakow, Poland. Chris completed his orthopedic Residency at the University of Alabama at Birmingham and a Fellowship in joint replacement surgery at Western University in London, Ont. Jennifer completed her family medicine Residency at McMaster University’s School of Medicine Niagara campus.

They both had opportunities to practise elsewhere, but chose to return home.

"By coming back to the region, not only is it a privilege to provide a service to the community, but we get to be a family unit,” says Jennifer, who joined the Niagara Health team last fall. “Even though I’m in a different specialty than they are, I still feel a lot of support from them.”

“It’s a privilege to work in a city that you grew up in,” adds Chris.

Paul, 67, was looking to slow down his career when Chris joined the Niagara Health surgical team five years ago.

Paul no longer sees his own patients, but he works with Chris on joint replacement surgeries, providing guidance and wisdom.

“I’m more of his assistant,” Paul says with a smile.

Chris interjects: “He likes to call himself an assistant, but he’s more of a mentor to me.”

Working alongside a veteran surgeon like his dad has allowed Chris to do "bigger cases," he says. “It's allowed me to get right into the game. We work together as a team.”

"We discuss cases the day before,” adds Paul, who received his medical training at the University of Ottawa. “We can have a phone call at 11 o’clock at night about cases. I’ve seen most of this stuff a thousand times. We shoot ideas back and forth.”

Paul and his wife, Kathryn – who he says is the “heart and soul of our family and keeps us all together” – are happy to have their kids so close.

“We’re all here now,” Paul says. “All of my kids are within an hour’s drive, which is great. They’re best friends. We’re a tight family.”