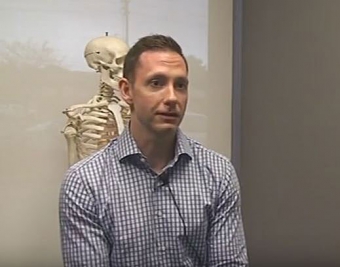 On December 7, 2016, Scott MacPherson, a 36-year-old chiropractor in St. Catharines, was in his office with a patient when he suddenly felt his left arm go numb.

He began to feel dizzy and lost the use of his left leg. He made his way into the hallway where his wife saw him and immediately called 911. Paramedics arrived quickly and after an assessment, realized Scott was having a stroke.

Scott was taken to Niagara Health's Greater Niagara General Site in Niagara Falls where he received a clot-busting drug and at the advice of his care team in collaboration with specialists at Hamilton Health Sciences, he was taken to Hamilton General Hospital for clot removal.

“I basically went in (to the hospital) without the use of my left arm or my left leg and the whole side of my face had been drooped, to the next day waking up and feeling pretty good,” says Scott. “I had the stroke on a Wednesday, the Monday I got out of hospital, and actually the Wednesday I went back to work.” While in hospital, Scott began doing exercises the day following his clot removal surgery, and continued rehabilitation after he left hospital. Within six weeks, Scott had amazingly made a full recovery.

Leanne Hammond, Manager of the Regional Stroke Program at Niagara Health, credits Scott’s recovery to a number of key contributing factors including calling 911 immediately, receiving care in the emergency department by a team of health care professionals, and the collaborative effort of the hospital and its partners in the Central South Regional Stroke Network.

Watch a video about Scott's story: