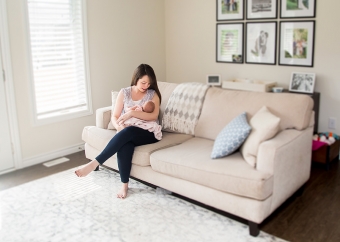 Kandace Parks knew she wanted to give birth naturally and did not want a cesarean section. Her yet-to-be-born baby wasn’t necessarily co-operating.

Kandace’s water broke at home the morning of June 24, two weeks before her due date, but she wasn’t having contractions and wasn’t in active labour. When the Fonthill woman arrived at the Women’s and Babies’ Unit at Niagara Health’s St. Catharines Site, she was given the option to stay and walk around until her labour progressed, or to return home. She opted to go home, but she returned 12 hours later when labour didn’t start on its own.

While she didn’t have a formal birth plan, she did know she wanted an epidural and didn’t want a c-section. But she knew there could be complications in her case so she put her faith in her physicians to inform her of the options to ensure both her safety and the safety of her baby.

To reduce the risk she’d need a c-section, she said her care team supported her through the early stages of labour before giving her an epidural.

“They informed me I had to wait until I was two to three centimeters dilated before I could get the epidural, which was very hard at times, but it reduced the chance of a c-section so I appreciated that,” Kandace said. “Everyone made me feel so comfortable and taken care of. They gave me the motivation to work through it.”

News that Niagara Health is rated as a top-performing hospital for conducting fewer low-risk cesarean sections compared with the national average is no surprise to Kandace.

For the third consecutive year, the Canadian Institute for Health Information (CIHI) recently rated Niagara Health in the top 10 per cent of large community hospitals nationwide for performing fewer low-risk c-sections.  Niagara Health has achieved this rating since centralizing maternal services at the St. Catharines hospital when it opened in 2013.

Kandace described her experience as supportive, relaxed and an environment where she felt in control of her labour and delivery from the moment she walked through the doors.

“It’s that approach that made our experience what it was,” she said as she cradled her two-week-old daughter, Emma. “I can’t say enough about the nurses, the doctors, everyone we saw. The care we had was amazing from start to finish.”

Dr. Johan Viljoen, Niagara Health Deputy Chief of Staff, Chief of Obstetrics and Gynecology, and the physician who delivered baby Emma, said that while c-sections became more commonplace over the last decade, there has been a greater emphasis among healthcare providers everywhere to reduce the procedure unless clinically essential.

“At Niagara Health, we allow for natural labour whenever possible. Less intervention leads to better outcomes for mom and baby,” he explained. “This significant shift has occurred since we created one specialized unit because it allowed us to standardize our practices and enhance the team approach to patient care.”

CIHI also rated Niagara Health as a top performer for having fewer injuries related to the use of forceps or vacuums during delivery.

Just because you’re already performing well at something, doesn’t mean you stop looking for ways to continue improving.

This is the theory Dr. Johan Viljoen, Deputy Chief of Staff and Chief of Obstetrics and Gynecology and Laura Farrelly, Director of Patient Care for the Women, Babies, and Children’s Health Program were working from when they introduced a new process last spring to triage pregnant women.

Since May 2017, women with pregnancy-related health concerns have been screened when they come to the Women’s and Babies’ unit on the fourth floor of the St. Catharines hospital using the Obstetrical Triage Acuity Scale (OTAS), a triage system similar to the one presently used in Emergency Departments. Triaging all women allows the specially-trained staff to assign patients a level of seriousness and prioritize their medical needs based on those who need evaluation and treatment urgently and those who can safely wait.

More serious patients are examined by an obstetrician and have tests ordered within 15 minutes of arriving, Dr. Viljoen said. Although it’s too soon to measure any major impacts of the new process, “the feeling from staff and from patients is that it’s making them feel safer, and improving the quality of their care,” he said.

Women who cannot get to the hospital on their own should call 9-1-1.

Results associated with the OTAS process will be shared by Niagara Health once more data has been collected.

The Women’s and Babies' unit has: