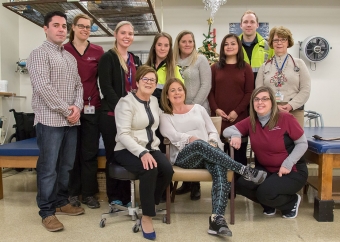 It was the best Christmas gift Kristen Cook could receive.

Inside a room at our Greater Niagara General Site this week, she was reunited with the people who cared for her after having a stroke last year.

“You all being here is the best Christmas present,” Kristen told the group of healthcare providers. “I will never forget you. Thank you all for saving me.”

When she walked into the room, Kristen was greeted with a hug from each of the healthcare providers from Niagara Health and Niagara EMS.

Kristen, a 41-year-old mother of two from Port Colborne, suffered a stroke last Christmas Eve. She was taken by ambulance to the Emergency Department at Greater Niagara General. After tests showed hemorrhaging on her brain, she was taken to a Hamilton hospital where she stayed nearly two weeks, including time in the Intensive Care Unit.

She returned to the Niagara Falls hospital, where she was cared for by Niagara Health’s Stroke Centre team for a week. She then spent three months at Hotel Dieu Shaver Health and Rehabilitation Centre in St. Catharines to continue her recovery.

Reuniting with the Niagara Health and Niagara EMS teams who she had not seen in nearly a year was important for Kristen. “This was huge for me,” she told the group. “I had to do this. You will have forever changed my life.”

Kristen was joined by her mom, Colleen, who is a retired Registered Nurse at Niagara Health.

"She’s a Christmas miracle,” Colleen says of Kristen. “We came this close to losing her. I’d like to thank all of you, too.”

Scott Chambers, a Registered Practical Nurse at the Niagara Health stroke unit, was delighted to see Kristen and to witness the progress she has made.

“It makes every day worth it,” says Scott.

“They became a second home and a second family,” says Kristen, who recently wrapped up outpatient therapy with Hotel Dieu Shaver. “Everyone there was phenomenal.”

“I’m so thankful for everyone in the healthcare system,” she adds. “They saved my life.”

Watch a video from the reunion: