IT'S A GIRL! Kinsley is Niagara Health's first baby of 2018 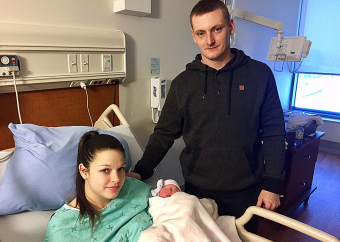 Kennedy was due on Jan. 24. But little Kinsley clearly had other plans: She was born at 12:51 a.m. on Jan. 1, weighing seven pounds, six ounces.

“We never expected it to be from us,” Bryan says of welcoming the first baby of the New Year.

“Especially because the due date was further ahead,” adds Kennedy.

It was also special for Registered Practical Nurse Ariane Sneek who was part of their healthcare team. It’s the first time Ariane was involved with a New Year’s baby birth.

“It was pretty exciting,” she says.

"Baby Kinsley unpacks a surprise for mom and dad." Niagara This Week