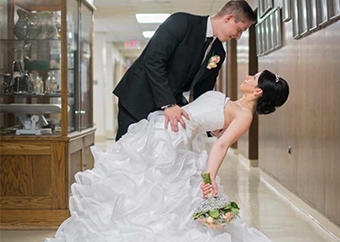 Douglas Memorial Site Registered Practical Nurses Cathy Case and Jackie Junkin literally define Compassion in Action. The pair sprang into action on Sunday after learning through social media that the daughter of a palliative patient was planning a last-minute wedding at Niagara Health’s Fort Erie site so her mom could attend.

“They really care and have compassion,” said mother-of-the-bride, Kim Sherwood who is a patient at Niagara Health’s Douglas Memorial Site. “They’ve all come together and helped so much.”

Chelsea Barkley and Jordan Harper were planning to marry sometime next summer, but as her mom’s condition worsened, plans changed.

“I don’t think I would have been able to look forward to my wedding without my mom here,” Chelsea said. “The help we’ve received in the last few days has been amazing. This has meant the absolute world. I couldn’t have pictured it any different.”

What Cathy and Jackie managed to put together in less than 24 hours was extraordinary. Everything from the décor, the cake, and Kim’s perfect red dress was donated by Cathy and Jackie’s family, friends, coworkers and local businesses including Subaru of Niagara who donated the flowers. They spent Monday night and Tuesday morning transforming a meeting room into a beautiful wedding venue in time for the afternoon nuptials. Their husbands were even recruited to help. On the big day, Clinical Manager Donna McIntyre helped Kim get dressed and did her makeup.

“A young woman starting her life needs her mom by her side on her wedding day,” Cathy said through tears. “My daughter is getting married next year and one of the biggest gifts in the world for any mother is to watch her daughter get married.”

Jackie, who’s been with Niagara Health for five years, said from the moment she received Cathy’s text about the couple’s social media posts, they became unstoppable.

“When the two of us get together, there’s nothing we can’t do,” Jackie said. “This is about creating memories and hopefully they can look back on this day and have some joy.”

Kim said Chelsea realized the seriousness of her condition on Saturday night after a dinnertime visit with the family. Kim was diagnosed with an “untreatable” rare form of cancer last year. “Until then, I think she was hoping for a turnaround,” she said.

Chelsea and Jordan decided they needed to get married as soon as possible in order for Kim to be well enough to attend. In a long shot, they put the call out for help on their social networks. They got more responses than they expected.

“We didn’t expect it to be so extravagant in this short amount of time,” said Jordan. “It’s amazing.”

Even a photographer whose parents were cared for at the Douglas Memorial Site before they passed away donated her services. Wendy Teal’s mother’s funeral was held in the hospital so her ailing father could attend the service. (Read about Wendy's parents here)

“This is my way to pay it forward,” Wendy said.