Working together from kilometers away to save kids’ lives 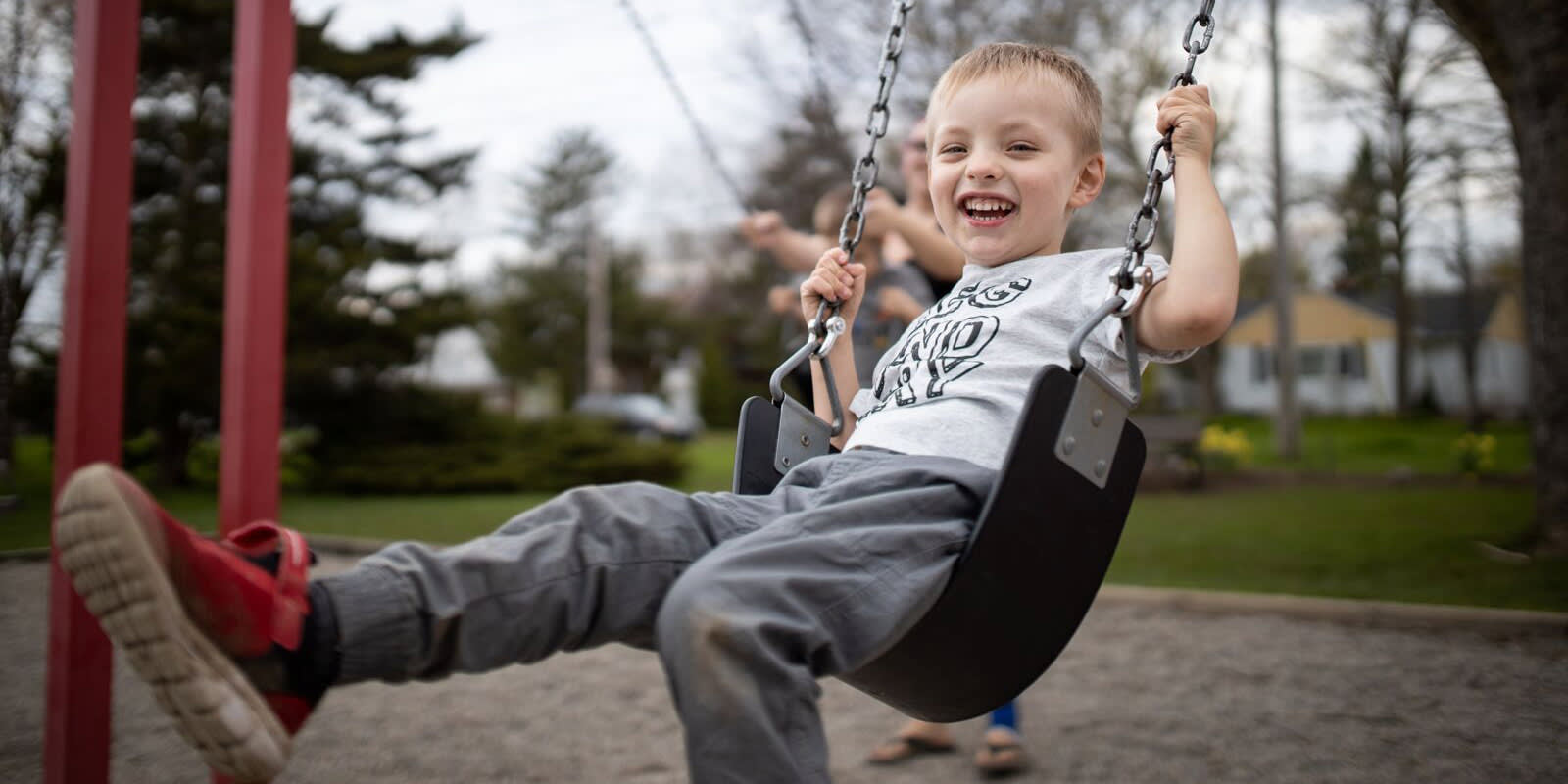 When three-year-old Lucas Waring of Welland woke up feeling sick earlier this year, his mom Nikki thought it was the flu. However, it quickly progressed to a swollen tummy and erratic breathing.

Nikki knew something was very wrong and took him to the closest hospital, Niagara Health’s Welland Site.

His X-rays showed that his abdomen was filling with air and pressing on other organs. It was getting bigger by the second and his health was rapidly deteriorating. Soon, the pressure would cut off his blood supply and stop his heart.

The Niagara Health emergency team knew he would need to be transferred to Hamilton Health Sciences’ McMaster Children’s Hospital (MCH) to determine the cause of air build up, but first they had to save his life. They connected to MCH’s pediatric emergency team using the newly launched tele-resuscitation system to get immediate help.

The tele-resuscitation system — the first of its kind in Ontario — uses video conferencing-like technology from industry partners Ontario Telemedicine Network. High-definition cameras are set up in the resuscitation room at each Niagara Health hospital. When the emergency team at MCH logs into the system they get a bird’s-eye view of the patient and room. The MCH team can control the view, as well as speak and listen to the team at Niagara Health. This allows the MCH team to remotely coach the Niagara Health team through advanced techniques to stabilize patients as quickly as possible.

"We’re focused on reaching beyond our walls to provide the best care possible to our most critically ill patients. This includes drownings, car accidents, poisonings, and acute asthma attacks," says Dr. Chris Sulowski, Deputy Chief of Pediatric Emergency Medicine at MCH and tele-resuscitation lead. "With this system, we can give advice as if we’re standing there ourselves."

Working as one team

Unbeknownst to Nikki, Lucas was the first live case using the tele-resuscitation system.

"Everything was happening so quickly," says Nikki. "I didn’t think anything of it when I saw the doctors were talking to a different set of doctors on a TV screen. Everyone was calm and knew what to do so I didn’t even realize how life-threatening his condition was."

Once the system was up and running, the MCH team instructed the Niagara Health team to stick a needle in Lucas’ abdomen to let the air out. They saw an instant improvement in Lucas as air gushed out the needle and the pressure in his belly decreased. Colour came back to his skin. They began to prep him for transport. Though they had relived the pressure, air was still filling Lucas’ abdomen so the needle had to stay in place until he was at MCH.

"It’s rare for an emergency doctor at a non-children’s hospital to see a child in Lucas’ condition," says Dr. Madan Roy, Deputy Chief of Pediatrics at MCH and chief of pediatrics at Niagara Health. “The ability for the Niagara Health and MCH teams to work together as if they were in the same room saved his life.” 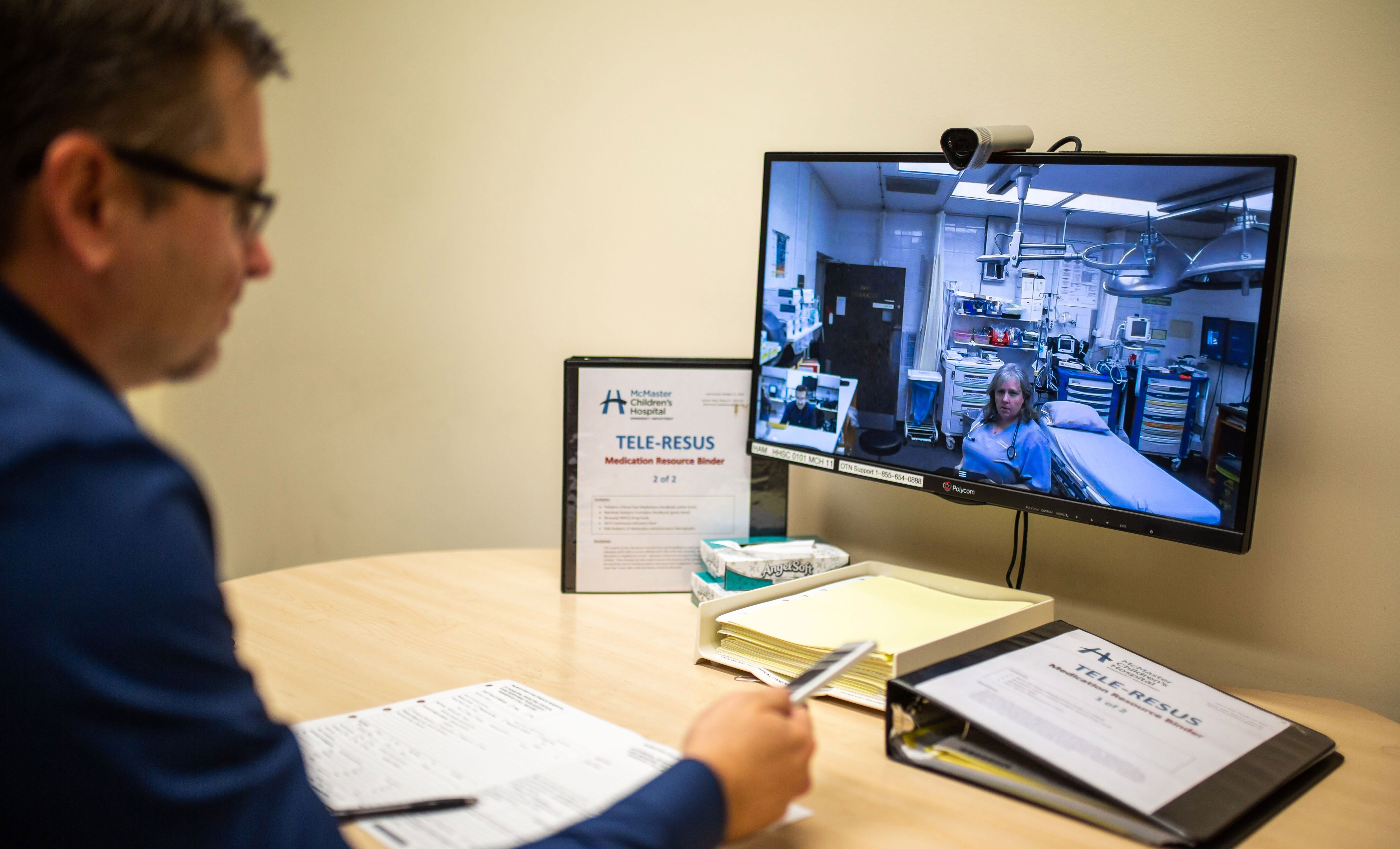 "The physical distance between McMaster Children’s Hospital and our hospitals can be a challenge in life-threating situations," says Dr. Rafi Setrak, Chief of Emergency Medicine at Niagara Health. “The tele-resuscitation system eliminates that challenge. It allows our teams to work collaboratively and more efficiently when time is of the essence."

Since these situations are not overly common, the teams anticipate using it once or twice a month at most. But it has already proven its value.

When Lucas arrived at MCH, the team knew his situation well and he was in surgery within the hour. It turned out his intestines had twisted, cutting off blood supply and causing a portion of his stomach to rupture. The air that regularly travels through the stomach was flowing out the hole into his abdomen. The team at MCH untwisted his intestines and removed the damaged portion of his stomach.

"A couple days after Lucas’ surgery Dr. Roy came to check on him," says Nikki. “That’s when I learned it was the first time they’d used the live video system. I was not only surprised, since it seemed like they’d used it many times before, but extremely grateful because they were able to save Lucas’ life."

Lucas' scare hasn’t left him with any long-term consequences. His stomach is slightly smaller, but it hasn’t changed his eating habits and he’s back to being an outgoing, healthy three-year-old.

The team behind the tele-resuscitation project at MCH is looking to extend the system’s reach to other community hospitals within the region it serves so even more children can benefit from this technology, and the specialized expertise of its pediatric emergency team.

Brock University Health Sciences students played an important role in creating the tele-resuscitation. Students Rachelle Roy and Lidia Mateus conducted research, identified best practices for the use of OTN in clinical settings and helped to create the process map by which physicians are contacted when patient cases arise. They are also helping to evaluate the system to identify areas of improvement. Rachelle and Lidia are part of the Interprofessional Education for Quality Improvement Program (I-EQUIP). I-EQUIP functions as an extension of the classroom, providing an opportunity for students from Brock University, as well as leaders and front-line staff from Niagara Health to work together on a variety of quality patient-care initiatives.