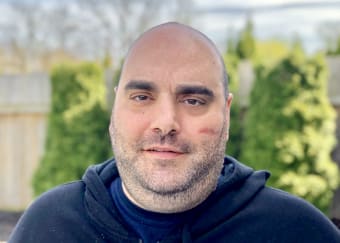 Carmine Posteraro considers himself a miracle.

On March 25, the day he learned he had tested positive for COVID-19, the Niagara Falls resident was taken by ambulance to the Emergency Department at Niagara Health’s Greater Niagara General Site. He had severe damage to his lungs, he was struggling to breathe and his oxygen levels were low.

Shortly after his arrival, the 39-year-old was intubated: A breathing tube was inserted through his mouth and into his airway so he could be connected to a ventilator that would keep him breathing.

Twelve days later, Carmine woke up in the Intensive Care Unit, which cares for the most critically ill patients, at Niagara Health’s St. Catharines Site.

He was disorientated. He was alive.

Three days later, after his condition had improved, Carmine was moved to the unit dedicated to caring for COVID patients at the St. Catharines Site. He spent 10 days on Unit 4A before returning home.

“When they brought me out of the ICU to the fourth floor, the healthcare team was clapping for me. It was just amazing,” Carmine recalls. “I’m thankful for the Niagara Health team. From the person who cleaned my room, to the personal support workers, to the nurses and doctors, the care was amazing. Everybody treated me with dignity. I thank God every day that I’m here and that I was able to survive this. I feel like I was a miracle.”

Those initial 12 days while her son fought for his life were agonizing for Carmine’s mother, Rena. A no-visitor policy at the hospital during the pandemic meant she could not see him.

“I just wanted him to live. I prayed a lot,” she says. “I had a lot of great support. The team in the ICU was fantastic.”

Every day Rena spoke with the ICU team over the phone. She said everyone was incredible, but she especially wanted to acknowledge three Registered Nurses that she had regular contact with, Jim and Jane Hyman and Marina Savic, and Respiratory Therapist Peter Morrone.

“They said, ‘You call anytime,’ and that happened every single day. It was so comforting. I knew he was in good hands. I knew they were by his side when I couldn’t be.”

Making the situation even more difficult for Rena was that her husband, Dominic, who had also tested positive for COVID-19, was admitted to the COVID unit on March 30 with a high fever and pneumonia. Dominic was in much better condition than Carmine, and he stayed in hospital just over a week before returning home.

“I have the ultimate respect for front-line healthcare workers,” Rena says. “I don’t know what I would have done without them. I had my son and my husband in the hospital at the same time. The healthcare team was so caring and amazing. They were the heroes who kept me going.”

During his time in hospital, Carmine also suffered kidney failure and required dialysis. More than four weeks after returning home, his recovery is slow but progressing. He is often tired, has blurred vision and numbness in his legs.

“It’s getting better every day,” he says. “I’m truly blessed to be here.”

Carmine says he wants to share his story to show how devastating the virus can be and to encourage others to heed the advice of health experts to stay home as much as possible, practice physical distancing and clean your hands often. He also wants to stress how rapidly the virus can spread.

Carmine had been receiving care at an addictions recovery program in London in March when the pandemic was declared. His dad drove to the western Ontario city to bring him back to Niagara Falls. A few days later, Carmine learned that a staff member at the addictions recovery centre had tested positive for COVID-19. Carmine, who was already feeling unwell, and his parents were tested for COVID.

“Please follow the guidelines set out by the government and health experts,” says Carmine. “This virus really kicked the heck out of me. It really took a toll on me.”

Carmine never imagined he could get so severely ill from the virus.

“I never thought that I was sickly or prone to sickness,” he says. “I’m just thankful I’m alive.”

When he was first admitted, Carmine had pneumonia and severe damage to his lungs -- acute respiratory distress syndrome. He was placed into an induced coma in an effort to save his life.

Important to Carmine’s recovery was lying him on his stomach for four days, 16 hours at a time, to improve his oxygenation, says Dr. Tsang.

“It was the early days of the pandemic, and we were all learning at the time to treat people with severe lung injury secondary to COVID-19,” she says. “Putting him on his stomach gave him time to recover from the severe inflammation on his lungs. It changes how the air enters the lung. It helps to improve oxygenation and protects the lungs, allowing them to heal.”

Dr. Tsang says she and the healthcare team are delighted Carmine is on the road to recovery.

“To learn that he is now home and recovering, it’s very rewarding as a physician. I am so happy for him.”