Reflections on a “life of firsts” and Black History Month from Niagara Health Board member Dr. Gervan Fearon 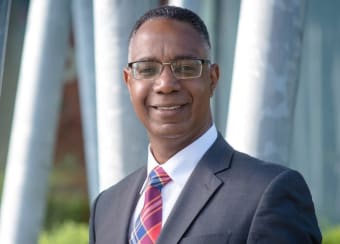 Dr. Gervan Fearon is a Board member at Niagara Health and President of George Brown College in Toronto. As a Black Canadian who has charted his own path – and helped paved the way for others – we were interested to sit down and learn about what Black History Month means to him.

“History is made every day by the things we do,” says Gervan. “Anyone who breaks the mould with their own ‘first’ makes it easier for the next generation because of the groundwork forged.”

Born in Birmingham, England to Jamaican parents, Gervan and his family moved to Jamaica in 1964. They immigrated to Canada in 1968 when Gervan was nine. When he first arrived in Canada, he spent his time exploring his own self-identity and how he, as well as others, would eventually see him in the history of Canada. He enriched himself by learning about Canadian Black history in Canada and Niagara, and the significant contributions Black people have made to Canadian heritage, history and society.

One notable figure that stood out to him is Harriet Tubman, who risked her life to help end refugee slavery in the U.S. The route to Niagara’s Underground Railroad began at “The Crossing,” which is located along the Niagara River by historic Fort Erie and ends at British Methodist Church, Salem Chapel on Geneva Street in St. Catharines. The church, which Harriet attended, is near Gervan’s former residence when he served as President of Brock University.

It is also important to recognize that, even prior to Harriet Tubman, members of the Niagara Black community and Indigenous Peoples served alongside General Brock in defence of Upper Canada. Black Canadian history is one of contribution as well as one of courage and sacrifice.

Another is Jean Augustine, who, in 1993, became the first Black Canadian woman to be elected to Canada’s House of Commons as a Member of Parliament. She’s a family friend of Gervan’s, and is someone he admires deeply. She played an instrumental role in parliament, where Black History Month was unanimously established.

Before receiving his PhD in economics and Chartered Professional Accountant designation (CPA, CGA), as a high school student, he took several history classes, but there was little taught about Black history. He’s grateful that Black History Month has helped to create change across Canada and today we are all better for knowing our shared history and the contributions made by all Canadians to this great country.

“Because of Black History Month across Canada, Black history is taught, revealed and honoured,” he says. “Black History Month is a symbol of the steps that have been taken in becoming a society that is inclusive and committed to evolving.”

He adds that it also encourages people across Canada to take time to reflect upon, and recognize, the history of Black Canadians, who are an integral part of “the mosaic in making Canada the country it is today.”

“Black History Month is an opportunity to celebrate our work towards being a more inclusive country as well as supporting the history less known and voices less heard, and a time to reflect,” says Gervan. “Let’s continue to progress beyond where other generations have gone. I’m excited to see and celebrate what the next generation accomplishes by recognizing Black history today.”