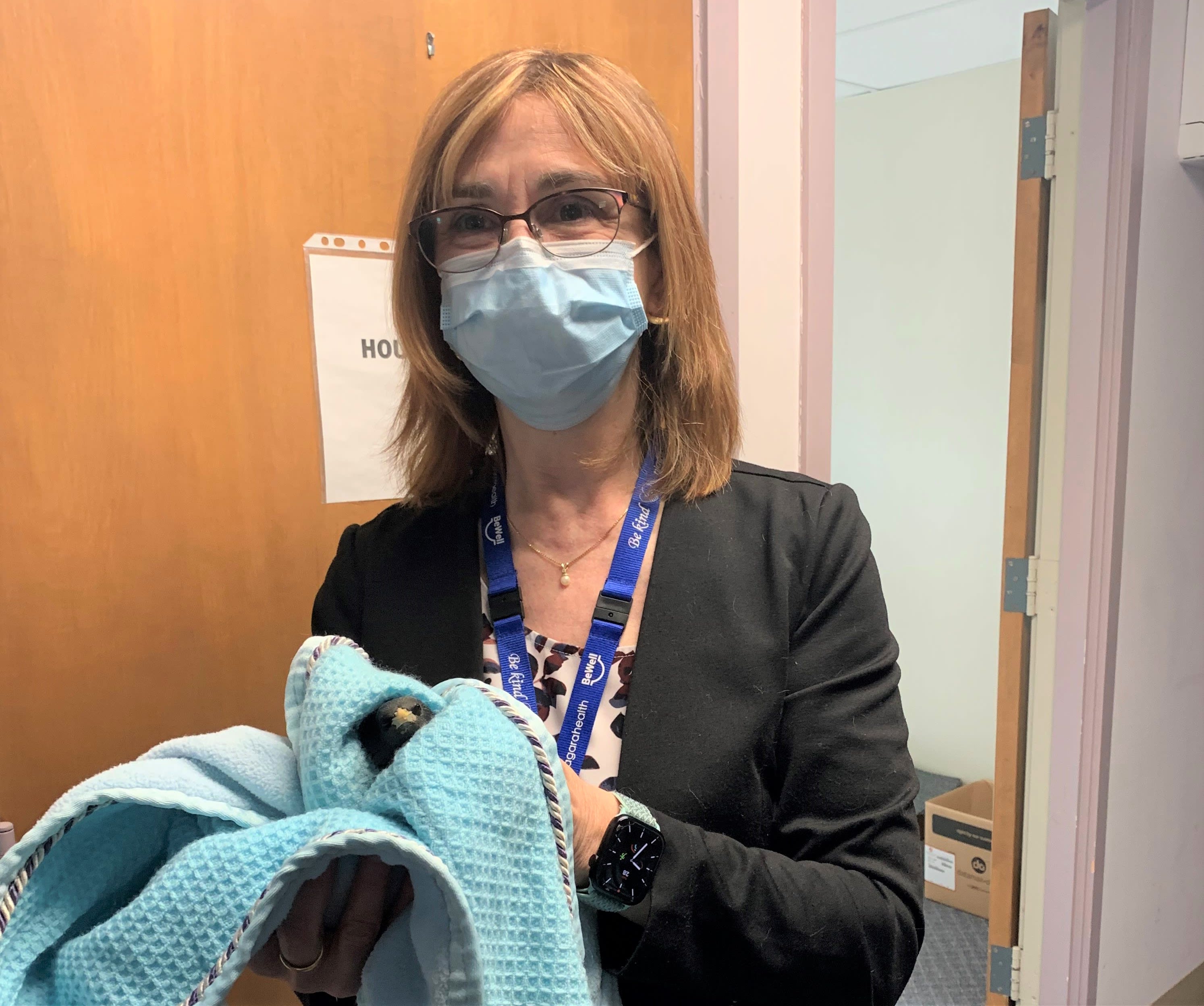 Teri Haeni, who retires this month as Niagara Health's Manager of Switchboard and Resource Centre, ICT, holds a bird she rescued recently on the job.

For Teri Haeni and her team, 2,800 phone calls is a regular day operating the switchboard for one of Niagara’s largest organizations.

So is 4,800, it turns out. But the day the phone lines lit up that many times on Jan. 17, 2022, during a record snowfall in the midst of pandemic’s fifth wave, it was undoubtedly Teri’s busiest in her 47-year-career.

Teri, who’s held several posts with Niagara Health over the years, retired as our longtime Manager of Switchboard and Resource Centre, ICT this month with Jan. 17 and its average 200 calls an hour forever etched in her memory as employees, patients and visitors called the hospital for all the reasons bad weather and a pandemic can create.

Callers wondered about care options and rescheduling appointments. Staff who couldn’t travel worried about shift coverage. Through it all, the switchboard team, which was also impacted that day, was dedicated to guiding everyone to the help they needed.

“We were struggling like everyone else that day,” Teri recalls. “Even though we were short-staffed, everyone on the team pulled together and worked an extra long day to answer as many calls as we could and provide the assistance that people count on.”

It’s not the only memory Teri will take with her as she embarks on her next chapter. Her stories about her time in healthcare start at the former Hotel Dieu Hospital in St. Catharines as a teenager in 1974.

Her sister, who worked in the kitchen at Hotel Dieu, convinced her to apply for a job washing dishes for $1.90 an hour. She eventually moved up the ranks to a clerical job in the kitchen office.

Unsure of what career path to take after graduating high school, Teri stayed on doing clerical work and took college classes at night. She also worked in admitting, accounts receivable and as a clerk on a medical ward.

Switchboard would prove to be the ideal post, especially after becoming a mom to Jess, now an ICU nurse at the St. Catharines Site, Sarah and Alex.

Teri transferred to the former St. Catharines General site on Queenston Street in October 2005 where she worked as an operator. She has been a trusted team member on complex projects to streamline and centralize Niagara Health phone systems, particularly as technology, staff and patient needs, and sites changed. You could even hear Teri’s voice for a time on the automated attendant when phoning a Niagara Health site. She also served as the non-emergent patient transport supervisor on a project that became part of the department’s role permanently.

And until Jan. 17 and those 4,800 calls, transitioning to the new St. Catharines Site in 2013 held fast as the most memorable milestone in her career. Her to-do list as phone systems changed and were combined, and the incoming phone calls from the public about accessing appointments, care and patients through the transition were more than anyone anticipated those first few weeks at the new hospital.

“It was pretty stable after that until the pandemic came,” Teri says. “Keeping up with the change in information – as soon as something was changed in the public, the hospital got (deluged) with phone calls.”

Over the past two years, Teri and her team helped connect members of the community with the information they needed to safely visit our hospital sites, public health measures on site when coming for appointments, booking COIVD-19 tests and updates on loved ones in hospital.

In addition to responding to inquiries from outside the hospital, Teri and her team ensured Niagara Health leaders were contacted for after-hours emergencies. They co-ordinated alerts when urgent response was needed within the hospital, and they managed the phone line used by staff to report absences, including when they needed time off because of COVID-19.

A testament to her leadership as switchboard manager, Teri has several staff on her team of 30 who have been with her and Niagara Health through many transitions and especially Jan. 17, answering calls for the five Niagara Health sites 24 hours a day, seven days a week. That’s what she’s most proud of as she sets down the phone receiver professionally and looks forward to more time with her grandchildren and volunteering with animals.

“I have had such a good group of staff with me,” Teri says. “Keeping that group together has been a valuable tool to keep things cohesive.”