Gratitude and the Golden Rule at root of RN’s success 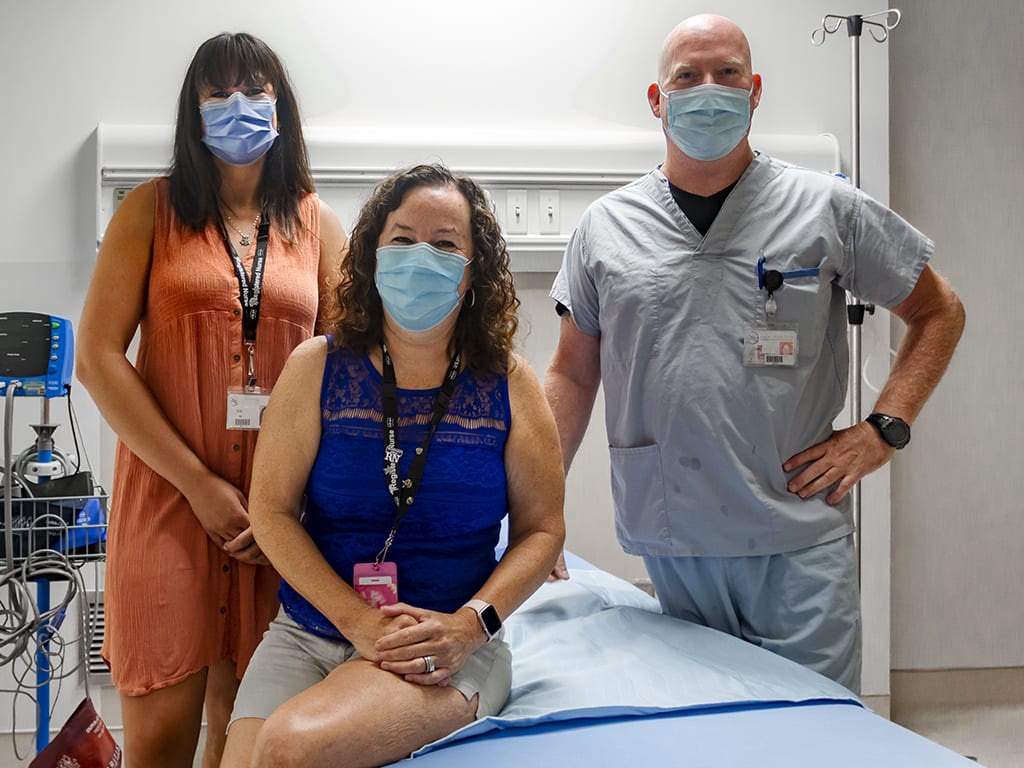 Mary-Jo Sawula can’t remember a time when she didn’t want to be a nurse.

It was especially difficult for her to forget during her first career as a bank teller and the three robberies that happened on shifts she worked. After the third hold-up, Mary-Jo, who had a young daughter at the time, knew she had to get back to her original career plan.

“I thought, ‘Enough.’ It just makes you re-think your career path,” Mary-Jo says. “Nursing was something I always wanted to do.”

She enrolled in nursing school, graduating in 1993 as a Registered Nurse (RN). While there have undoubtedly been plenty of career-affirming moments in the years since, one of the most significant happened recently when Mary-Jo, who works in Interventional Radiology at the St. Catharines Site, was given a Niagara Health Nursing Excellence Lifetime Achievement Award.

“Mary-Jo holds patients’ hands when they are anxious, explains procedures and adds in a bit of humour to brighten their days,” her nomination reads. “She buys and hands out birthday cards for her patients and advocates for their needs. She offers help to everyone working in Day Stay, including staff that are not a part of her program. She is always available for advice and believes that nursing is a team sport.”

That’s only a small part of what was said in her nomination. But Mary-Jo’s reaction to the award gives a big clue as to why she stands out as a health caregiver.

“I don’t know how I got so lucky in my career,” she says. “All the people I worked with over the years produced who I am as a nurse. I’m grateful I won (the award) but it’s not me alone.”

Some of those people who shaped Mary-Jo into the nurse she is today came into her life when she was two years old and her father was killed in a car accident.

Her family lived next door to the church they attended and its adjoining convent. Where her father left off, nuns stepped in to help her family however they needed.

She started her career in orthopedics before moving to the Emergency Department at the former Hotel Dieu Hospital where she strived to be a beacon of calm in a fast-paced environment.

“You see a lot of trauma, a lot of heartache, a lot of bad things so I always try to bring solace and peace,” Mary-Jo says.

Like the time she pushed two stretchers together so the wife of an elderly man who was dying didn’t have to leave his side. He died with her arms around him. Or when she brought a big comfy chair to a palliative patient so he could sit with his head on his wife’s shoulder as he passed.

“The son came out afterward and grabbed me and put his hands on my face and said ‘Thank you. I didn’t know it would be that nice,’” Mary-Jo recalls.

“We’ve delivered babies, saved people’s lives,” she adds. “There’s lots of good. Any journey a patient is on, if you can make it easier, then you’ve done you’re job.”

For the past eight years, Mary-Jo has worked in Interventional Radiology Day Stay, where she’s part of a “top-shelf team,” working alongside two other RNs, Corey Lacas and Erin Heynemans providing pre- and post-procedure care.

“I said, ‘We’re going to be one. We’re going to be us. The job I do right now, I could do forever. The three of us have so fine-tuned it … and our manager, Steve Walker is the best ever. He is part of the success we’re having.”

That doesn’t make it any less emotional than her days in the ED, though. The patients she sees are dealing with some of the most serious cancer diagnoses. Mary-Jo and her team strive to make their time in hospital as easy and comfortable as possible.

To do that, she often draws on something her mentor, Penny Kyle, told her early in her career. “Penny would always say, ‘It’s an algorithm. Don’t get yourself in a panic. Focus on what you’re doing.’ You have to be actively aware of your patients,” Mary-Jo says. “She was compassionate, kind, an excellent mentor but she expected greatness. She wanted you to achieve that and you wanted to show you could do it.”

These days, that means always communicating with her team so she can anticipate issues and respond accordingly and in the moment, not getting distracted by anything else.

Mary-Jo also focuses on a couple of other rules of thumb in her day-to-day work that make her a model of extraordinary caring: She practises gratitude by thanking her coworkers daily and always remembers the Golden Rule.